Cherrapunji is a sub divisional town at the East Khasi Hills district in Meghalaya. It is the second wettest place on earth, first being Mawsynram in Meghalaya. The historical name Sohra is more commonly used for Cherrapunji. Cherrapunji is the traditional capital of a Hima, the Khasi tribal chieftainship constituting a petty state, known as Sohra. 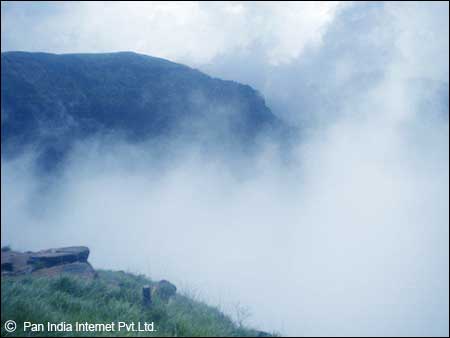 Cherrapunji is situated at 25.30 degrees north and 91.70 degrees east. It is situated at an average elevation of 4,869 feet. Cherrapunji rests on a plateau in the southern part of the Khasi hills. It faces the plains of Bangladesh. The plateau rises 600 metres above the surrounding valleys.

Due to excessive rain in the region the condition of soil is poor as rain washes away the topsoil. Soil condition is also hampered due to deforestation. Due to droughts in winter the vegetation is xerophytic. Valleys around the place are covered with diverse vegetation. There are several endemic species of plants in the valleys.


The predominant population of Cherrapunji is Khasi tribe. Cherrapunji follows matrilineal culture. The female owns the property of the family. The children take the surname of their mother. After wedding the husband of the youngest daughter lives with the wife’s family.


Cherrapunji has a mild subtropical highland climate. There are influences of monsoon in Cherrapunji. Cherrapunji experiences annual average rainfall of 11,777 mm. It receives southwest and northeast monsoonal wind giving it a single monsoon season. It lies on the windward side of the Khasi hills. The orographic lift increases the precipitation. In the winter months, Cherrapunji receives northeast monsoon. The average temperature in January remains 11.5 degrees and 20.6 degrees in July. The annual mean is 17.3 degrees.


Cherrapunji has tropical monsoon climate. It receives rain from the Bay of Bengal; arm of Indian summer monsoon. The monsoon clouds move from Bangladesh and hit the Khasi hills which rise from the plains to a height of 1370 m above mean sea level. The low-flying moisture-laden clouds converge in the Cherrapunji valley. The winds push the rain cloud through the gorges and up to the step slope. The ascent of the cloud into the upper atmosphere hastens the cooling and thereby the vapors condense.

The rain of the valley is the result of air being lifted as a large body of water vapor. The extreme amount of rainfall in Cherrapunji is the best feature of the orographic rain in Northeast. When the clouds are blown over the hills from the south they are funneled through the valley. The heaviest rainfall occurs when the wind blows directly. Most of the rainfall occurs during morning. The wind blowing from the Brahmaputra valley and the winds of Meghalaya are trapped in the Cherrapunji valley at night and they cool down during day thereby falling in the morning. Cloudburst also occurs in Cherrapunji and humidity is high during monsoon.


The Khasi people are mainly engaged in agricultural activity. The vegetation unlike the wet areas is not lush green but appear in patches. Cherrapunji produces the best quality of oranges and pineapple. There are also few products, craft work and industry in Cheerapunji.