Cherrapunjee is one of the most beautiful towns of the state of Meghalaya. Located near the India Bangladesh border, the town is filled with natural beauty and serene sceneries all around. In addition to waterfalls, the town also has few natural tourist places which are frequented by huge number of tourists from across the world.

Find below the information about beautiful natural tourist spots in Cherrapunji. 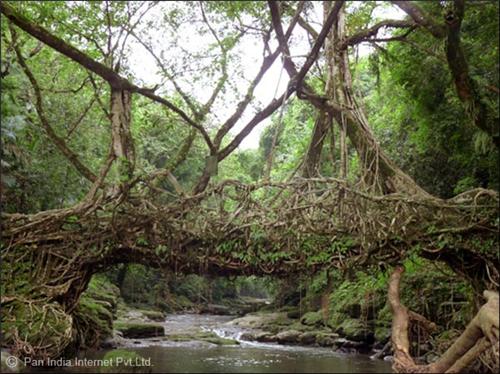 The living root bridges are several years old. Some of the bridges may date back to five or six hundred years. These bridges are made from the roots of Indian rubber tree known as Ficus Elastica tree. These trees were noticed several years ago by the Khasi people in the area. They discovered the powerful roots of the tree which could be used to cross rivers. They grew the bridges and used them for daily traveling. The trees grow along the streams and rivers.

A series of secondary roots are produced by the tree from higher up its trunks. They can perch atop huge boulders along the riverbanks or even in the middle of the river.

To make the root of the tree grow in the right direction betel nut trunks are used. The trunks are used as root guidance system. The roots of the trees grow in a straight direction because of the betel nut trunks. When the roots reach the other end they take root in the soil. The roots strengthen in due course of time. They take ten to fifteen years for being finally ready for use of mankind. The root bridges can be as long as 100 feet. The bridges are very strong. They gain strength over time. The bridges are so sturdy that they can take the load of fifty or more people at a time. The Living Root Bridge System attracts tourists from across the world that come to visit Cherrapunji. The uniqueness of the bridges is that they are found primarily in Cherrapunji.

There is also a special living root bridge in Cherrapunji, Meghalaya, known as the Umshiang Double Decker Root Bridge. It is a unique bridge and is one of its kind in the world. It comprises of two bridges which are placed one over the other. The Double Decker Root Bridge system is a popular attraction in Cherrapunji. The inquisitive tourists are bound to be excited to see the bridge and know regarding the uniqueness of the bridge which is one of its kind in the world and is found primarily in Cherrapunji. 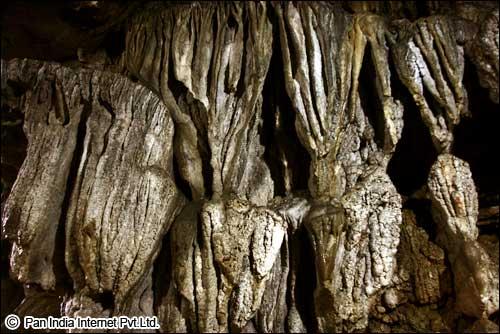 The Mawsmai cave is one of the major tourist attractions of Meghalaya. Tourists coming to Meghalaya flock the cave due to its spellbound beauty. The entrance of the cave is very narrow. The entrance is well lit but the inside of the cave is dark and mysterious. There are huge halls inside the cave which look like amphitheater. There is water dripping constantly from the roofs. The roof and the floor of the cave joins together to form pillar.

There are narrow passages inside the caves where one has to crawl or kneel down to pass through. This adds to the charm and excitement related to the cave. Tourists are thrilled and hugely excited while passing through the narrow passages. The interiors of the cave are naturally decorated with stalagmites and stalactite which lay scattered around the cave. Varied forms of life could also be spotted around the cave. Various small plants, algae, moss and insects species could be seen in side the cave. The cave opens at 9 am and closes at 4.30 pm for the tourists. 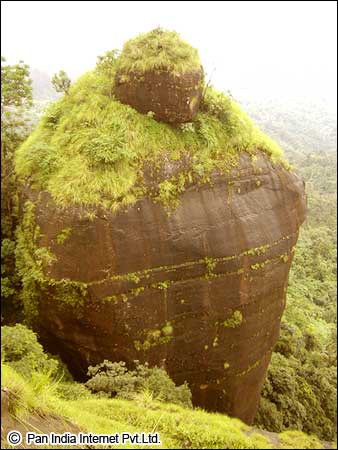 Khoh Ramhah is also known as Motrop. It is a single rock formation in the form of a giant cone. According to legendary belief it was the fossilized cone shaped basket of an evil giant. The rock formation lies near to the two other similar rocks standing like a pair of giant sentinels. During monsoon water flows between the rocks. The site of the waterfall is awe-inspiring. The site is flocked by tourists round the year. It is ideal as a picnic spot because of its breathtaking beauty. The plains of Bangladesh could be seen from the Khoh Ramhah site. It changes its color along with the season. it looks fresh and green with moss during summers and starts fading when winter comes. 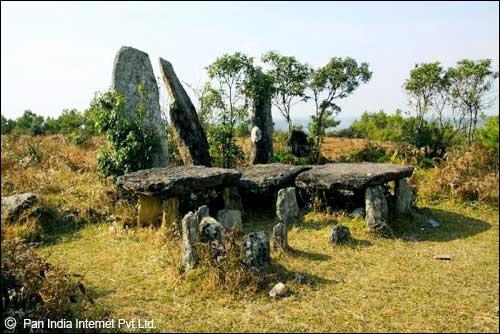 The Khasi Monoliths are memorials where the ashes of the dead people are deposited in cairns or cenotaphs, commemorating memorable events. They consist of labyrinth of underground passages. The Khasi monoliths are scattered in and around the Khasi Hills. The monoliths date back to several hundred years back. The upright stones generally represent men. They are of considerable size. They are sometimes of 20 feet or more above the ground. All around Cherrapunji Khasi monoliths could be seen lying scattered. They are there in and around the place with different designs and sizes. Some are located within localities while some are a little outspread.